It's important to celebrate getting through a hard time 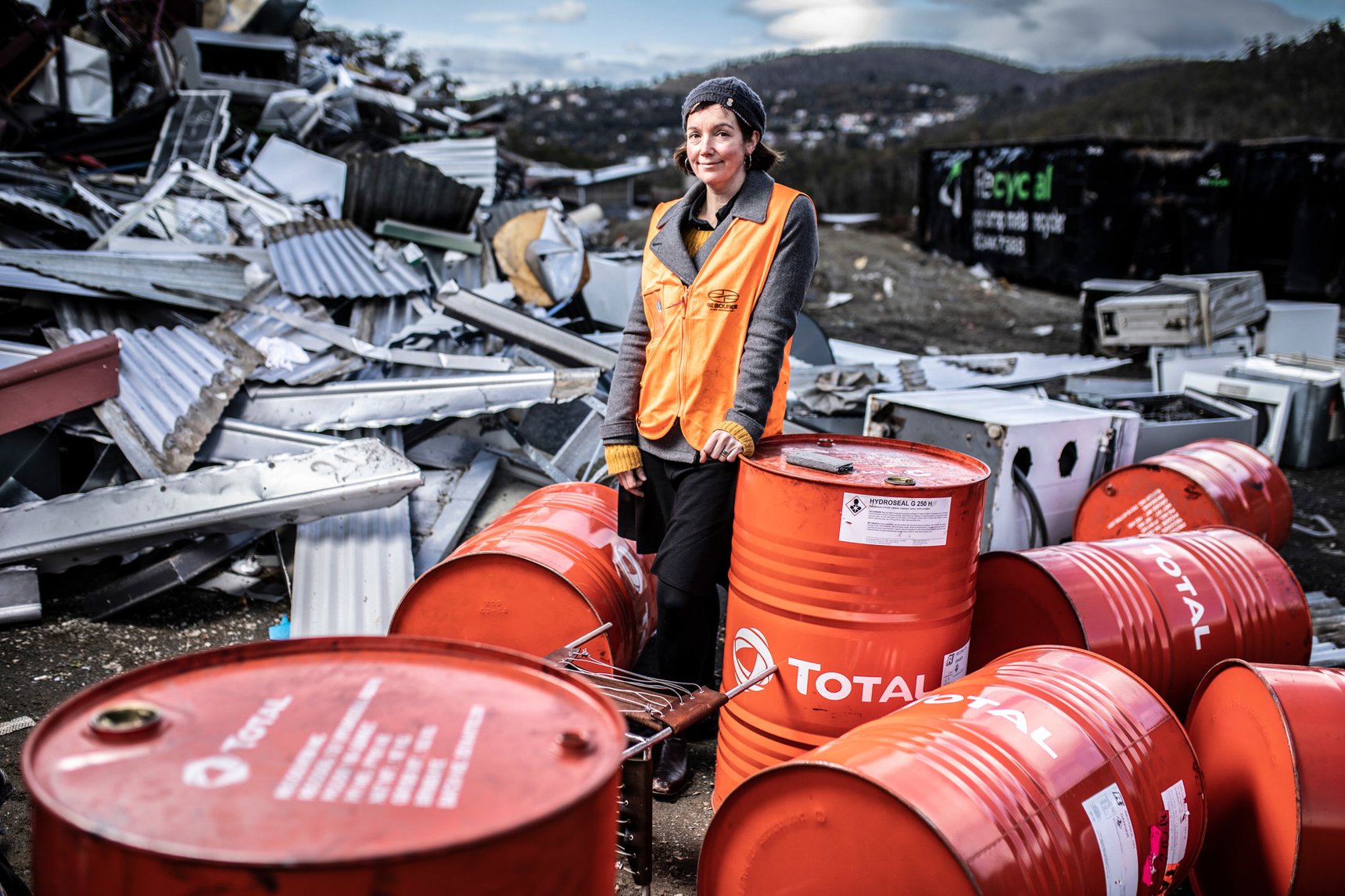 Molly Kendall at the tip face from which goods are salvaged regularly for the South Hobart Tip Shop. Image: Eddie Safarik

Rain used to be quite a calming sound for me. I travelled for a long time in a van and I guess I was a bit nervous about travelling on my own because whenever it was raining I felt like it was safe.

A sort of safe time for me because who would go around hassling people in vans when it's raining - and it really tainted my feeling of “oh isn't that lovely rain on the roof” safety association. I used to listen to a relaxation tape with rain in it and I just can't listen to that anymore because it's quite stressful, thinking “that's really heavy! Is it affecting the workplace?” [laughs]

It was totally apocalyptic because there were boulders that had been swept down the side of the hill and created massive canyons in their wake. And it was so misty, you know, when we finally came back into site and the whole building was fogged up and you couldn't get in. So yeah it looked really surreal, very apocalyptic, which is a pity because that was always my plan for the apocalypse - to go to the tip shop. It has everything you need. But we couldn't get in [laughs].

So all I had in the first little while was just footage from the site managers Eva and Jesse who had managed to get access, and they filmed the water coming up coming over the hill behind the tip shop. So that was coming down from the tip face itself. And it was just like a waterfall all the way across that big bank next to our tip shop and so they sent through some of that footage and it was pretty obvious that this was a major catastrophe and we weren't going to be opening anytime soon.

I'm responsible for sort of safety and security at the South Hobart tip shop. Once I found out that the site was obviously closed and dangerous I went around texting all the workers for the day letting them know not to come in. From that footage that they sent through it was obvious that most of the stock had been swept out of the driveway. We accept donations in the driveway and big apple crates had been lifted up and washed down the hill, trolleys had been washed down the hill, and there was water inside the whole building.

I guess no one was even able to get onto the site for those first few days and then we launched the big massive clean-up. But it was probably 48 hours until we went onsite with all of our personal protective equipment and just going in like it was post-apocalyptic which it kind of looked like when we got there.

The clean-up was an epic, epic mission for all of us. We've got 33 workers and we managed to get it done in 3 weeks which we were pretty impressed about. We'd sort of have crews of eight there during the day all bringing stock out, taking up to the tip and spraying down the stock that wasn't affected, and taking out all of the infrastructure - so all the shelving - and then when the shed was empty we had to spray it all out with water guns, high pressure water guns, and then soap, and then water guns again. So it was just such an epic clean-up. Yeah I'm pretty amazed that we even did it now. Because the shop is completely full again. It just filled up with donations instantly as soon as we opened again.

For me it was pretty devastating. We're quite a close workplace. Where I work is cooperative so the whole business is owned by the workers. . Everyone's very involved in the running of the business so our hearts and souls are really in the business. So yeah. The devastation of the business was like everyone's personal - everyone felt that on a personal level, all of our workers.

It was hugely galvanizing as a group. It really had an effect on our group cohesion. So yeah we feel like a very different group now which is lovely. It was a really lovely process in the end even though we were all shattered because that sense of ownership in the business also meant that every spare day that people had, they wanted to come and work because they knew that as soon as we could open the less of a dint it would make on our, you know, our ongoing costs. So people were pretty exhausted.

So all of the stock that's at the tip shop is either donated to us by kind locals or we salvage ourselves from the tip face. So we salvage three times a day as our normal operations from the tip face itself. So all of the goods are sort of hard earned either by us or generously donated. So hearing from the insurance company that we had to throw out everything that was porous - so books, magazines, clothing - it was just massive. I don't have the actual kilograms of how much we threw out but it was just truckloads and truckloads of stuff. And our main goal is to salvage from landfill. So it was sending all these straight to landfill, and it was hard as well because we shared our story on social media and social media - I mean it's amazing and it galvanized a lot of support for us - but a lot of people were quite critical of the fact that we had to throw out so much stock which was hard to fathom when it was already hard for us to do so. That was a tricky tricky time. It's our main aim, to keep stuff out of landfill. So it was pretty hard.

Yeah I sort of feel like we can deal with anything that's thrown at us now. So that's really helped. That feeling and solidity and like everyone's in this game together. And with our customers! Their acknowledgement of what we went through and just realizing how special that is - your relationship with your customers and your regulars. When you have a conversation with one of your customers at the counter when you're serving, it could be the only interaction that that person has with another human that day. And it's super special. So yeah that's kind of helped me realize the important part that we play in our community for them but also for us.

It definitely turns the volume up on your personality I think and it's the challenge for everyone because they see sides of themselves that are not necessarily lovely. Like I had quite stressful moments where I just felt like I needed everyone to listen to my direction, and other people were having other emotional moments. And then there were like beautiful generous moments where people would you know bring a massive feast to help with the workers on the flood and yeah there were huge shows of generosity.

It was definitely an experience in self-growth for me. And I felt like people were really - It's like the volumes were turned up on their personalities, and overwhelmingly that was positive. And yeah I guess the negative stuff was an opportunity for self-growth.

I think I have just moved on. Like I really just went “ok that’s over” and yeah I got to mentally get myself into the next phase. I really wish that I could have done a big thank you to the co-operative for all the people that pitched in while the memories were still fresh. But things are just so busy and we just moved on. So yeah it's probably a lesson really, is that to really acknowledge getting through something like that. I guess people don't generally celebrate after a grief which is kind of what it felt like. I mean it was a triumph but yeah I think it's important to celebrate getting through a hard time.