Cocktail dress with a hard hat on

The first floor was turning into a fish tank 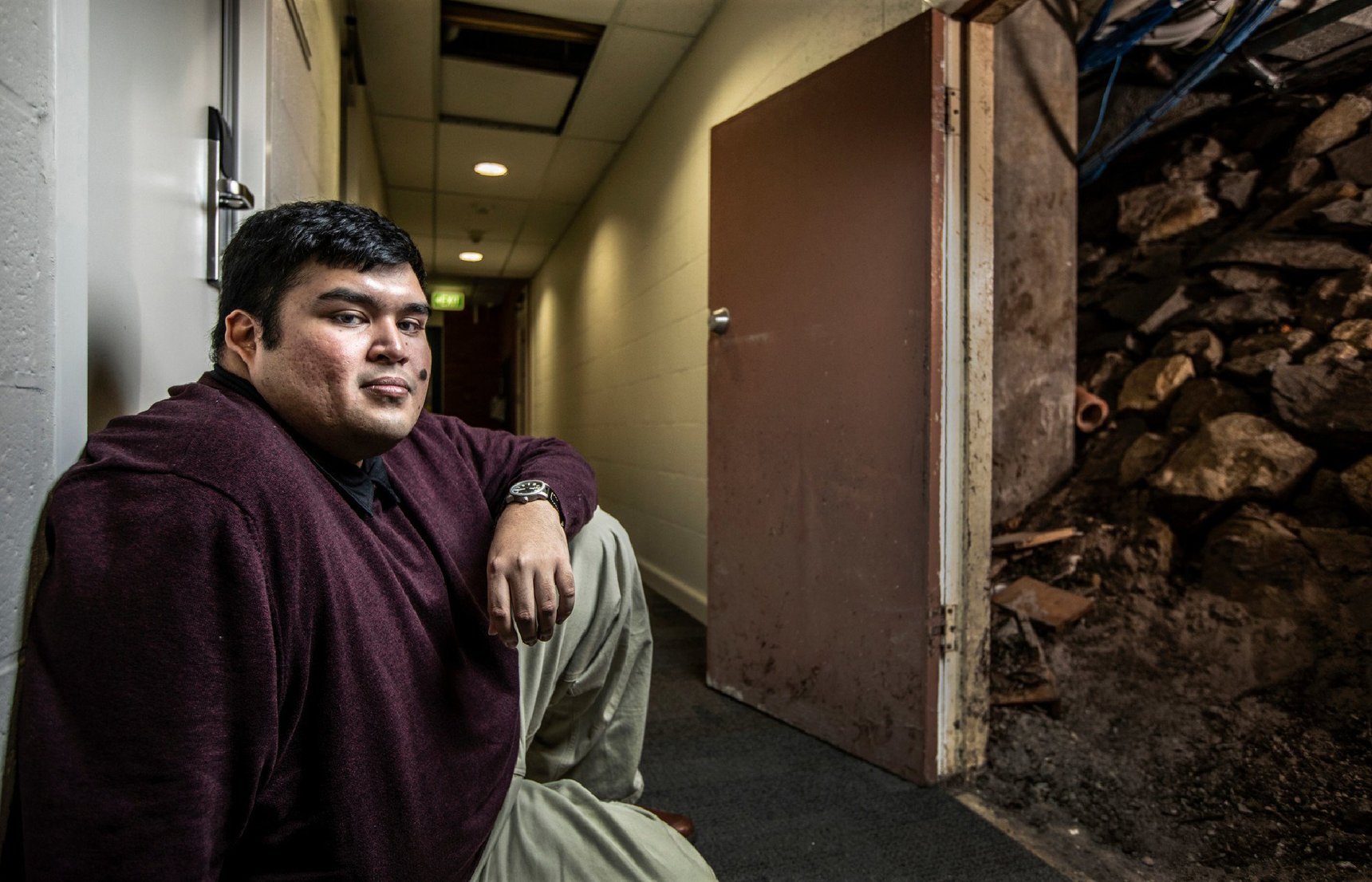 Benjamin Ezekiel in front of a room forced open by the water at John Fisher College, University of Tasmania. Image: Eddie Safarik

It was this weird sight of somebody in a cocktail dress with a hardhat on shouting at people in the water.

And then Francis had his uniform on. I had, I think I just had sweat pants, a hoodie, and my boots on from hiking. And then there were other people that were just in whatever they were wearing. It was just an odd situation with this mix of people, the chaos that was going on, and everyone just running around trying to figure out what to do.

It ended up being that the older people in the college, I guess, started to just do something and everybody–don't get me wrong–everybody was doing something but it was a bit of just running around trying to figure out, “What can I do first?”

It felt a bit unreal because the first thing that came to my mind at least was that we're on the side of a mountain. Like you don't get flooded on the side of a mountain, and you know I'm not from here, I'm from Singapore, and the rain that we had that night was not much more than any other tropical rainstorm that we usually get. So I would have thought that the infrastructure would have been able to take that amount of water.

I was at John Fisher College just up on College Road during the night and I think we were just hanging out when the flooding started. Yeah, just in the kitchenette area having a few drinks and chat. We were supposed to have rugby training that evening and it got cancelled because the rain seemed to be starting to pick up. So we were all in the college–noticed that the rain was getting a bit heavier and heavier over a couple of hours but we weren't too concerned at first. In a weird way it was kind of jovial when we first started because you know we all appreciated the fact that because of the weather we were all in the same place and we didn't have anywhere to go. So we were just you know catching up with everyone and just enjoying each other's company.

I think that would have been about maybe nine-thirty, ten o'clock when the water pipe started leaking and we tried to control it at first and it seemed manageable. And then all of a sudden I think somebody on the third floor realized that the staircase that was behind the college had become a river. And we were all wondering where the water was going. And that's when we found out that it was going straight into the first floor through a supply closet and the door was actually forced open because of the water. And somebody had shouted that the first floor was turning into a fish tank and that, you know, we needed to go down and deal with it.

And so there were two rooms that were directly in the path of that door that water was flowing out and it took I think all of 2 minutes for us to go, “All right well let's form a human chain and just move furniture out of there.” So while some people were moving their belongings onto the bed frames and onto the tables to get things out, I went down with another guy to just carry that fridge out because we were trying to avoid having any electrical items in the water at that point.

I was redirecting the water with Francis and another guy and what we were doing was that we had lockers that were being used for residents to store their cooking utensils and equipment and we didn't really see any other choice and we just took them, lay them on their side, and we blocked the water from going further down the corridor on the north side I think. And then we used other lockers to redirect the water out of the building. So that was what I was doing when I realized that you know we got to make sure that nobody else gets too badly affected by this.

The two rooms were just completely devastated. They were just covered in mud and water and so were the hallways that were directly flooded. But one of the other effects from the flood that night was that power had been interrupted. Power interrupted the whole of the Sandy Bay site. And so–none of us can quite remember when the power cut out because we do have emergency lighting, but it was just I think about 11:30PM that we realized that there was no more power and people were getting concerned, people were getting scared. And so one of the things that we did was that we just started having drinks because you know there was nothing else that we could do. We knew that there was an evacuation process but that was for fire evacuations. And the steps were to get everybody outside of the building. But we couldn't do that when it was still raining. And so just to calm everyone down it's like, “All right you know we did a good job, let's have drinks to celebrate” and that managed to get everyone through the first night.

At least there was an understanding that we had each other's backs and that if anything happened we would deal with it as it comes to it. Yeah. I used to be in the military. And so I was–I'm trained to deal with crisis situations and pressure situations–I was fine. It was more of making sure later on that these people that were also still in the building were being taken care of and that they were safe. And given that you know the next day everything was shut. It was just that. That was the point that got difficult to be like, “All right. We need to get these things but I'm not quite sure where or who do we approach to get it.”

I had gone out with another person to get clean water because the first thing that I was aware of was that after a flood you wouldn't have clean water anywhere or you wouldn't have, or there's no power, there's no way to boil anything. So we had to go get bottled water. And I remember driving to Sandy Bay with nothing working, nobody out, getting into the middle of Hobart and just realizing that, “Wow it was really bad last night”.

You know the individuals in that organization were fantastic in helping students cope with everything that was going on and with transitioning to back to a normal phase of life. And on the night itself the residents were fantastic. Like that spirit of collegiality was strong as ever. And everybody was looking out for one another–even international students who usually aren't out and about were being welcomed and being told you know everything would be all right. And I think that was a very strong example of the human spirit at work.

It was extremely lucky that nobody had gotten injured in any of this. It was extremely lucky that, you know, that the rugby trainings had been cancelled, that people that were out for the scholarship didn't came back early. We were extremely lucky that we had individuals like Francis and other people who were older and had dealt with these sort of situations before. There were so many things that could have possibly gone wrong and there was so many things that should have gone wrong that just didn't, for whatever reason, and then that's more to do with luck in the way that we responded rather than actually being prepared for anything.

I think generally the thing that needs to be carried away is not so much how to deal with a situation when it's happening but what–how we respond after a situation has occurred and that is, that it is always helpful to respond with support rather than looking for people to blame or situations to expose or make it seem as if it wasn't anybody's particular fault. Always best just to make sure that people are responded to and taken care of properly after these incidents.