I wish we could bottle the kindness

It was little things that kept you going 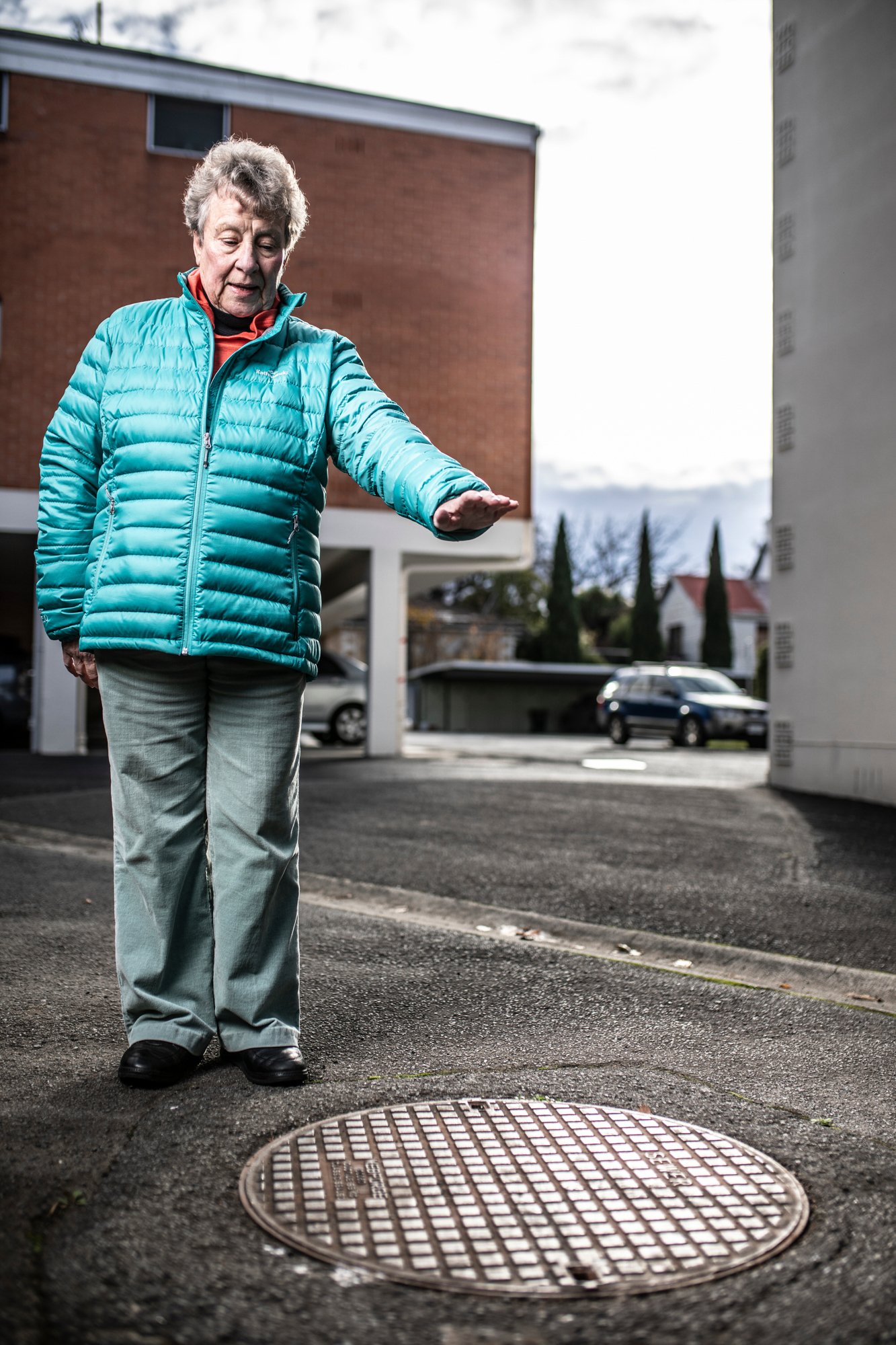 Robyn O'Connor indicating the height of the water spouting out of the sewer outside her unit in Sandy Bay. Image: Eddie Safarik.

I was very tired and I wanted to sit down, have a nice meal, and watch a movie, and I'd just gotten into my track pants, and I had a phone call from a friend and she said, “Are you okay?” And I said, “Yes I'm fine”.

She said, “Are you sure you don't want me to call by?” And I said, “No I'm positive”. And she said, “Well have a look out the window” and I looked out the window and everything was fine.

And half an hour later everything wasn't fine. It changed that quickly.

The first thing I noticed was–there's a manhole for the sewerage system that was outside my window and I could see that the lid of that was floating–was a geyser of water coming out of the sewer outlet.

Then I noticed there was some water seeping in under one of the windows. Quickly realized it was coming in all the walls and under the door which was out to the main foyer area and it was also being driven by the wind through the windows. The force of the wind was driving it through into the unit.

So I had to move fairly quickly. It became obvious–first I started picking things up, getting them up off the floor, up onto higher points, and as the water got deeper I realised that there was no chance of doing it, and the things I've been putting up were starting to fall back down because I hadn't settled them, and I was starting to get a little bit panicky at that stage. So at that point I grabbed a bag and threw a few things into it.

My friend was on the phone from time to time checking on my progress because I had let her know that things had changed and she said, “Don't forget to take a pair of spare shoes because you're going to get your feet wet”. Well my feet were already wet because I was in ankle deep water at that point.

And then I made my way out to the foyer area where it was deeper and as I got towards the front door, was getting up a bit more.

I got to the car and put my things in it, got to the street and the police were actually closing off the Channel Highway on the Taroona end. Then I made my way up Sandy Bay Road and all of the side streets leading down from the university were like rivers. So that was pretty frightening because I was driving in water.

I eventually managed to get myself to the Southern Outlet and the rain had stopped at that point. I got to the Lea before the rain started again and then it was an electrical storm. Then when I got to Kingston, Brown's River had broken its bank at the Southern Outlet end so I wasn't sure what to do and the wind did come up. So I was worried about going on to Sandfly because I knew I'd be going past a lot of trees and I had to go along a dirt road.

So I rang my friend and said, “I'm not sure what I'm going to do but I don't think I can get to you. I'll keep you posted”. And I had another friend in Blackman's Bay and I rang her and said what was happening and was it okay. She said, “Yes, please come. We haven't got any power but everything's dry”. And they just opened the door and let me in. So I had a moment of calm for the first time in a couple of hours it seemed.

I was renting so I didn't lose property. I lost pretty much everything I had in the way of electrical appliances and furniture. But I was able to save clothing and documents because they were above–I think the water got up to about a metre in the unit. It wasn't just rainwater it was sewerage as well. And it was quite a shock because there was a lot of–from the sewerage–there was a lot of debris from that on the ground still, and faeces, and I think it was a rat trap, and ladies pads, and condoms and so on. So the whole thing was like a war zone when you first got there.

It didn't have a big impact on me at the time probably because I was very busy. I had a lot of things to do and I was kind of couch surfing. I think it was deluxe couch surfing because I had stayed with three different friends in the period of time before I finally settled.

The first place I went to on the actual night of the flood was a very close friend. She’s an Indian lady and her mother was visiting from India. She's quite young. So her mother's probably at a guess in her 50s. They had two little kids and her mother slept on the floor so I could have a bed. Now to me that is big. That's really big. And that's why I moved from that place when I had the opportunity because I felt that–they told me it wasn't the case–but I felt I was putting an added stress on their lives. They were very generous. They just opened their home up to me and made me part of the family. I mean they were friends beforehand but it was a big ask. Like she'd come home and say, “Um do you feel like roast chicken and veg tonight?” And I'd been up to my ankles in sewer water packing all day. I was cold and I was tired. I was really at the end of my rope and it was like, “Oh wow. Do I?” [Laughs] So those little simple things.

Part of the stress I suppose was not knowing where I was going to live. I was just staying with people, and I knew I couldn't go back to that building because that building is prone to flooding even in normal times, and so at that point I had no idea where I would be living, and it was around about the time when the housing crisis really hit. So everybody was out looking for accommodation and not much accommodation available. So a lot of the stress came from that as well.

It was little things that kept you going actually. In fact I had young neighbours upstairs who come from Nepal and–like my unit was a very small unit, and theirs was small too. And they had a friend staying with them, and they had organized that if I didn't have somewhere to stay, the two boys will sleep on the mattress outside and you can sleep in our bed so don’t worry, you're not going to be out in the street. [Laughs]

It was a bit of an emotional roller coaster. It was interesting. I'd occasionally meet people socially who had been through similar experiences. Sometimes they were far worse than mine and it was a great release to be able to talk to people because I don't think it hit me until afterwards.

I think it's made me much more aware–I think I said before–of the lack of importance of things and the great importance of human connection. And it is the human element that comes to the fore, and I wish we could bottle it and keep it all the time because there's a deep decency and kindness in all of us I think, unless we're sociopaths. Most people do care and they do reach out when there's a problem, all in different ways within their capacity.