Our little patch of paradise

What I bought the place for is gone

Kim Hutchinson with her animals on her Derwent Valley property. Image: Eddie Safarik 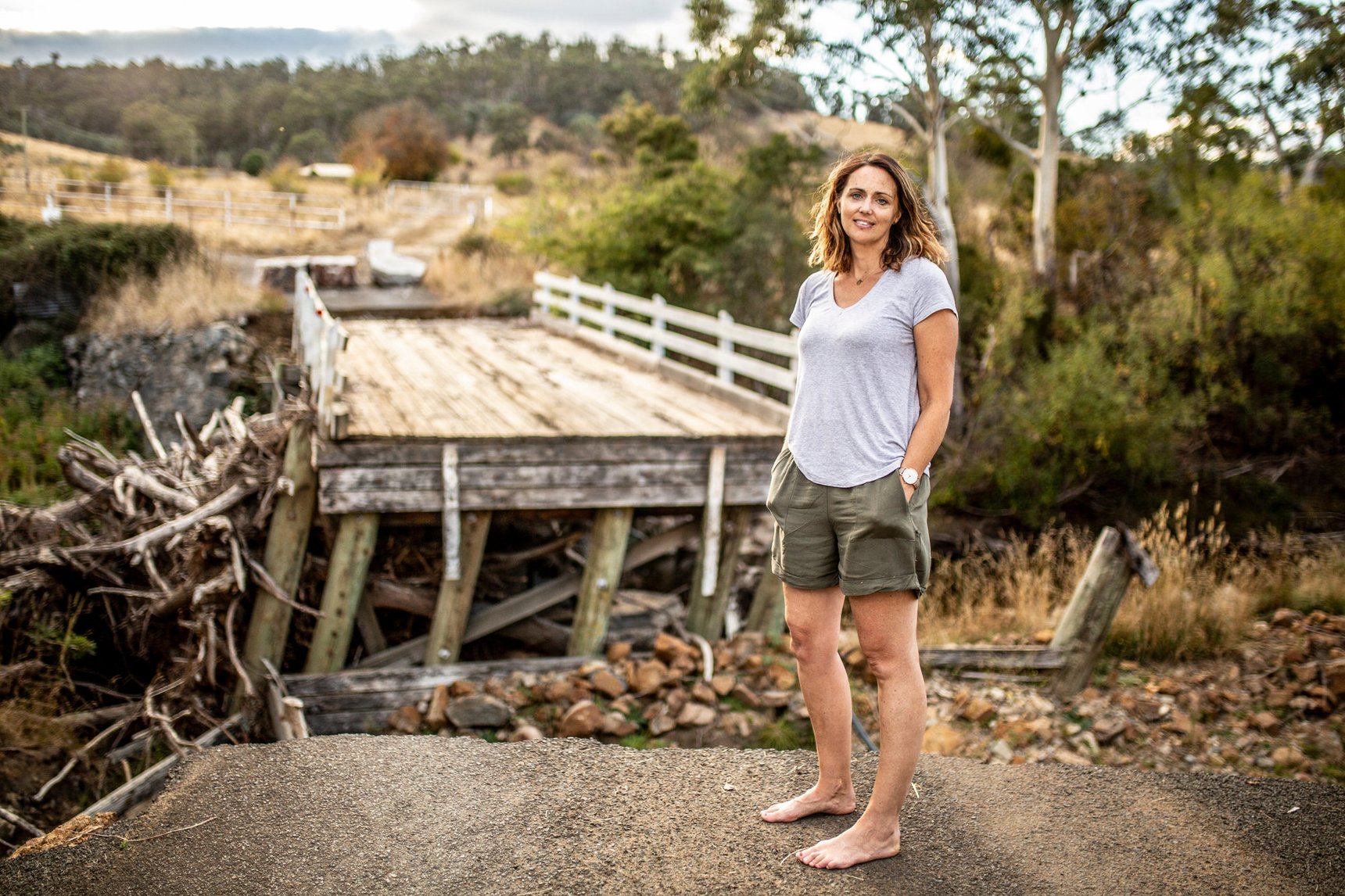 Alyson Watts in front of the bridge that was the only access to her farming property near New Norfolk. Image: Eddie Safarik

I was just gutted because–especially the next day–because our river banks all lined with trees, and poplars, and it's really pretty, and I used to walk my dogs every morning, every night, and it was just huge washouts, holes, rubbish everywhere.

There was quite a lot of dead animals on our property, not belonging to mine. We found the next door neighbour's sheep hung up in trees. There was three cats, possums, wallabies. So that's where I believe if a cat got caught, the flood must've come through at a huge rate, because cats are as cunning as anything, but they were washed up and hanging up in the willow trees the following morning and it really broke my son's heart because he's a very gentle soul that loves animals. But yeah. So we had to get a lot of fires going and burn up. Yeah, so I got quite down especially in the weeks to come. I was really struggling with work and general, general living. Hated going home, really hated going home, and my colleagues at work was really supportive but I just hated going back to the devastation that there was.

When the rain first started falling off and the river started running high and running fast–and it goes fairly well down there through the front paddocks–I wasn't thinking that we were going to be hit with a natural disaster. I was concerned about my animals and got them up because in the years the rivers had flooded and taken out or not taken out but sort of flooded halfway up through the paddocks but not damaging the fences. My primary concern was–for starters, earlier on in night when it was raining so much–was my neighbour. Was a young single parent with younger children, and always had a fear or vision that the kids might be running around down on the river and get washed away or something. And when I was outside–I recall it was about one o'clock in the morning–I seen his car leave and that was a big relief because I thought at least he's out of there. And my other concern was the lady down at the bridge on the main road. She was quite heavily pregnant. And I was concerned that their house might actually flood in and they'd be stuck in there, and with their young son, and being pregnant. Yeah. So I never thought there'd be the impact that it's had on us emotionally and financially. You know. They're always forecasting lots of rain and I'm guessing you just don't think that you're going to get that much rain that quickly.

I got up in the middle of the night and went out to check on chooks because I had a lot of silky bantams which don't do very well with being waterlogged. I got all them up and had them inside by the wood heater and this time it was teeming down. So I also got cats and dogs inside, out of it. I was down the paddock checking on–I had young guinea fowl keets. I was checking on them. And at seventeen minutes past three I heard there was a roar like a train heading down the valley which now I know was a flash flood. I heard an extremely loud smash and I went back up to my husband and said that we'd lost our bridge because the only access to our property was a small bridge built out of a section of the Bailey bridge.

With not much sleep, went back into the lounge room sorting out animals, trying to keep things dry, warming things up, and on the break of day we went down, and yes the bridge was gone. At this stage too, we realised in all the commotion I'd forgotten a pet pig that I had down on the riverbank in our property digging up the vegie patch. We raced down to him and he was still swimming with his nose above water. So we got him up and got him up also inside, got him dried out and thawed out and we had no loss of livestock lives but all our fences were gone on the bottom paddocks and the bridge was gone. Then I suppose the enormity of it was we were actually stranded. There was no way in no way out.

My husband went over there and as soon as he got over there he, he rang me and he just said, “Al the bridge is gone.” And I said, “What?” He said, “The whole bridge is gone.” He said, “The neighbour’s cars in the river. I'm going to be here for a bit.” Then the next thing I knew he came back and he got my 16-year-old son. And yeah. And he said, “I now need your help mate.” So they both went back over to the farm and they tried to pull the neighbour’s car that had been washed from their yard, their backyard into the river. So they said–I think Roger was sort of doing that and helping people out that were in the valley where the farm is.

I went over later that morning. It was still raining pretty heavily. Not as bad as what it was but it was still pretty, pretty rainy and horrible. So I just went to check on and see what had actually happened. Yeah. And the river was still running really, really fast at that stage as well so I suppose I was just trying to keep my seven-year-old away from that more than anything else. But we couldn't access the property because we had to–that was the other thing–we were just wondering how on earth we were going to get to it because we had no–the bridge was completely washed away so–well the two access points were washed away by big trees that had just come down the river and just completely taken out the sides of the bridges.

And then we were walking in and out until on Sunday we managed to get a little excavator. We had a bobcat at home and we pushed a bit of a rough track between my neighbour’s property at 588 and our property at 590 which is then what we started using as access.

Twelve months on, it's, it's–we've nearly got it back to what it was with–we've done a lot of work on filling the river and plant and fix the fences and do as much as we can. I'm scared for this winter especially without a road as such and even if we do get a road it's on a really badly slip area. So even we'll spend all the money which is quite a bit of financial debt again to go into, to have the road, it's on a slip hill. So if it slips we're basically going to be back out again. Well in or out depending on when it slips. Yeah. So there's just a lot of uncertainty now.

I love my children, I love my husband, but I love my fur babies. Always have, always been brought up rural. And yeah, you know most people think if you're trying to save a pig, that inside you are mad. You know. And he's a pig that was going to be destined for the freezer but there was no way after all that. I actually sold him on as a breeding boar. After all that I couldn't do anything with him. Yeah. No they just my family. Whatever, whatever sort of animal they are. Like I just believe if you can’t look after an animal don't have it. And that's why last year I let them down. So this year I've re-homed everything so hopefully they won't ever be caught in a flood and have to go without. And I mean nothing starved. But we had no hay. We just hand fed everything.

I like the place but nowhere near as much as I did like it. What I bought the place for is gone. I feel that the feeling of just the sanctuary–a lovely feeling of just having a little patch of paradise–turned into an absolute nightmare. Yeah. And it's sort of continuing on because without a bridge we've still got–well public access is an extra three kilometres driving and half, or seven or eight hundred metres of that's a real horrible track. Lots of potholes, lots of mud, and if you do manage to slip off, you fall a hundred foot straight into a river.

I suffer a lot more depression. I don't find the enjoyment in the place that I had. I've made some drastic decisions with the animals and stuff that I wouldn't have made. Yeah, I think life's returned pretty much normal for my husband and my son now. I was really concerned about my son's mental health but yeah, I just, I don’t know. I don’t know when there's a nice driveway and we can access our property and it's, you know, it's all good again, whether it will, but it's, yeah, it's been a really rough twelve months for me personally.

You often hear it in the news and I guess this year’s been a really good example of that with droughts and all the rest of it, just about, it is actually really tough on the land and the weather does impact on your ability to produce an income. And I think we've got a lot more empathy now for the farmers on the mainland who have been impacted by the drought and the choices they've had to make in relation to their stock. It certainly did bring home to us just how fragile it is on the land and how things can go wrong just like that, you know. Nobody predicted this event would happen, and it did, and it was impactful for yeah lots and lots of people.

It's just probably made us more mindful of how things can go wrong. Yeah.