There was no escaping the floods

We stopped counting once we had done sixteen hotel moves 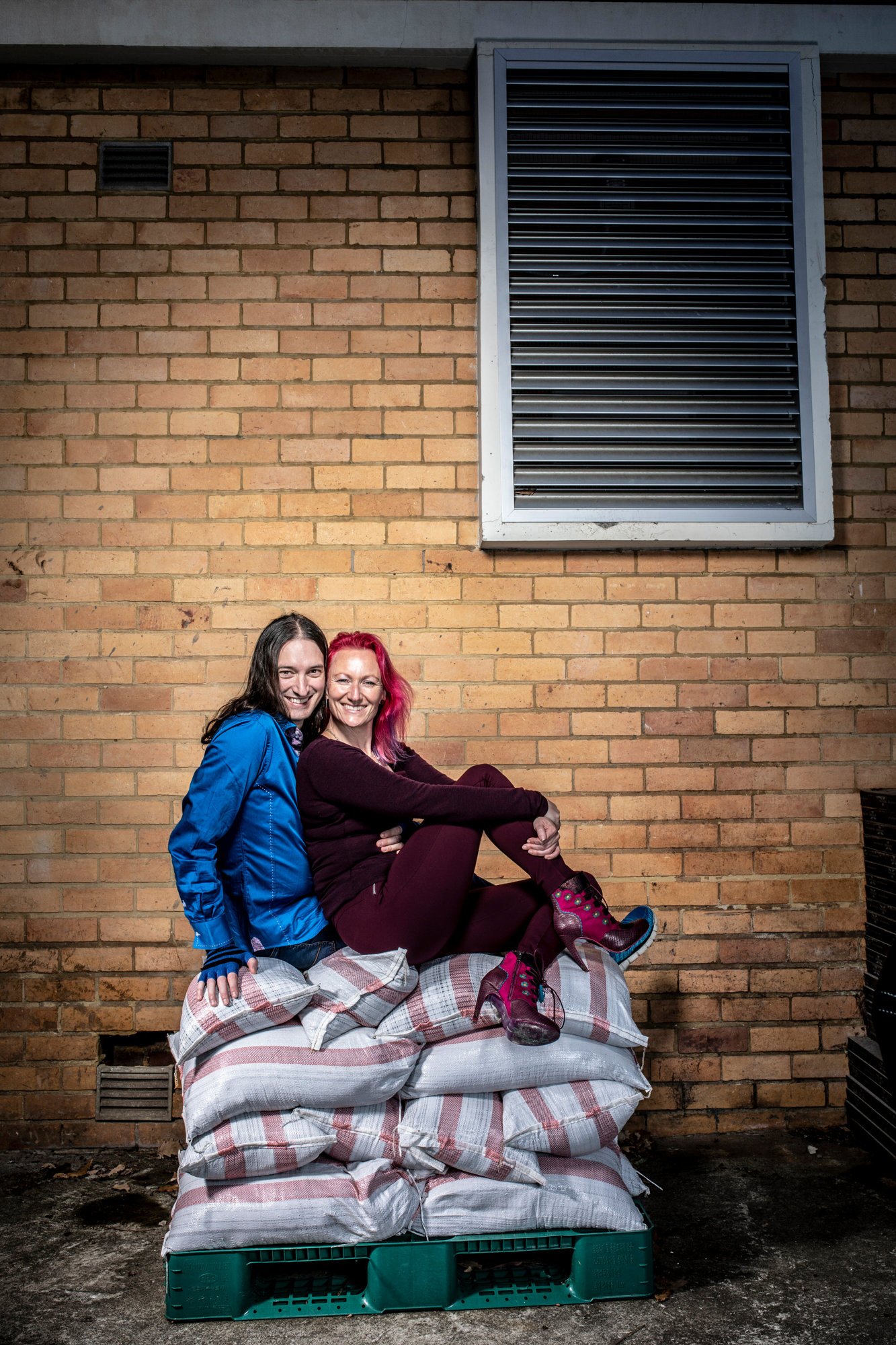 Kristy de Salas and Ian Lewis sit on a pile of sandbags near their flooded offices at the University of Tasmania. Image: Eddie Safarik

I just felt every single part of my life at that stage was massively displaced.

Ian: Just going back into the house was–

Ian: It was, it was a tiring thing just going–

Kristy: It was dark and it was cold and it was wet and it was devastated. So I had gone downstairs into the kitchen area and as I started to head back up the stairs, there was water on the staircase and I was like, “That's really weird because I'm sure that wasn't there a minute ago.” So I called Ian and he came from the top floor, and at that stage he found water up there as well and was like, “Oh no something serious is, is going on.” And then we started to go through the house and realised that the rock that our house is built next to had basically turned into this multi-tiered waterfall [laughs] that was hitting every level of our house, and just basically, just pouring the water through.

Ian: We were just running from one floor to another just trying to mitigate what was happening.

Kristy: And it happened really fast. I think within about–from not noticing anything to all of sudden the water just becoming fairly torrential throughout the levels of the house–was maybe 15 minutes.

Ian: It was even quicker than that. It was a matter of you could walk down the stairs and then walk back up and suddenly you're in like a centimetre of water that wasn't there. The power went out within 10 minutes of us noticing the flood.

Kristy: I went outside in the pouring rain and tried to dig a trench around the back of the house where I could see it was just pooling up. But it was, it was freezing. I remember it was absolutely freezing, and it was pouring with rain, and just trying to get as much debris out of the way so it would go around the side of the house while Ian basically tried to get all of the stuff out from the house–

Ian: And build little channels for the water inside with you know, towels and things like that, as best you can to try and keep it away from the carpet.

Kristy: And we're in a peculiar circumstance because we both work at the university as well. And so what we had also seen around that time was a small video that a student had posted online.

Ian: So some Chinese students had taken a video of the water busting in the university and actually flowing down a hallway.

Kristy: We kind of watched it and went, “Gosh you know that corridor looks awfully familiar”, and we think, “Oh gosh that's our corridor. That's our offices!”

Kristy: Sorry. Our labs. The water–and it was just kind of, looks like a little bit of a trickle–and I remember thinking, “Damn I didn't take those bean bags off the floor today and they are going to get soggy and that's just going to be annoying”. Little did we know the whole place was going to be wiped out. It was interesting when we got there the next morning just to check it out because it kind of looked like a spooky dark corridor that you'd see in a horror movie and it was just covered in really thick mud, and alarms going off, and just kind of crazy amounts of stuff. So we had gumboots and headlamps and potted around trying to at least find where our lab had been.

Ian: Where our lab was, was in the basement of the engineering building which was one of the areas the hardest hit. The water pressure built up so much that it broke a door open to get into that floor.

Kristy: And it was really interesting because you could see the force of the water that had come through that bottom floor had actually kind of smashed the doors of the offices inward, not just sort of opened them–

Ian: Some of them were bent. We had five feet of water in that in that space. We had some shelves that were five feet and say two inches [laughs] and then things on those shelves survived and everything else was completely lost.

Kristy: What we didn't realise was happening in the suburb that we live in is because we're all on a hill, while the initial water had passed, all of the water was now coming down through the hill soaking everything that it hit. And so then it started to soak all of the houses, and as it hit the houses, it didn't flood them, but what it then proceeded to do was go up all of the walls. And so what was happening to our house at the time was we were getting flooded from the ground up and it was basically creeping all the way up the floors of the house through the walls, through the roofs, through the carpets, through everything. And so after two days of cleaning out the university we finally got home to be settled, and then everything was starting to get really mouldy and wet and gross there, and we didn't realise–we didn't understand why, because we thought the rain had stopped. Yeah, so basically we just had to leave everything and then go to hotels. So we were basically ended up being out of our house for seven months. And we stopped counting once we had done sixteen hotel moves because of insurance bookings and all of that kind of stuff. It was just a disaster and a nightmare. So on the home front everything was destroyed–

Ian: On the home front we didn't lose items. But the house itself was seriously damaged–

Kristy: Yeah and had to be pretty much deconstructed and rebuilt. So the only thing that was basically standing was the brick structure of the house after they took all of the rendering off all of the inside walls, the ceilings, the floors, the carpets. It was just back to its brick shell which was just horrendous. Every single thing we knew to be solid and structural and the way we do things, none of that existed overnight. It was very confusing. We were discombobulated about–it's, you know, a better place to be at work because you know at least that looks like it's meant to be. But that wasn't either. And then when you had–dealing all of that at work, your natural inclination was to go home because that's meant to be where it's really nice. But that was a disaster area as well. So it was exhausting. It was absolutely exhausting.

Ian: Surprisingly so. You don't realise. We're telling the, the first world one percent version of this problem because the insurance company was paying for where we were staying. Where we were staying was really nice. But it's just really, really tiring not having a permanent base.

Kristy: It's really strange because both of us are kind of professional people and in our jobs we solve problems and we fix things. And these were two massive circumstances. There was literally nothing we could do to fix things. We just had to sit and wait. The first couple of days after the flood we had adrenaline and it was kind of, “Oh this is a bit of a fun and interesting adventure.” And then it just went on and on and on. And after a really long period of time, resilience was just gone. After the initial flood we were just in damage control and I'm kind of a bit of a project manager, and I go into, “How do I fix this” and, “How do I keep my team safe” and, “How do I keep everything moving forward” and, “How do we deal with this logistically” and I can power through that for a reasonably long period of time. And then I started to get sick. I had physical injuries I couldn't see, I was getting headaches, and I was just thinking this is just like cumulative stress of you know–it's a pretty stressful job at the university anyway–plus this, and I'm thinking, “You know this is–I'm just not feeling great at the moment”. So I was getting muscle atrophy, and I couldn't see, and all of these different kinds of weird things happening, and I'm thinking, “Oh I'm just getting old, just happens to be happening at the same time.” But then I went to the doctor and he was like, “No, this is actually a stress response, like a severe stress response.” Did some tests and said, “Your cortisol is just out of control. You're literally about to have”–what he called an incident. I'm not exactly sure what that means and I'm happy I didn't have to find out. But then he said literally, “Go back to your office, pick up your bag, and leave.” And I was like, “I don't know how to do that” [laughs]. And I thought, “Well I can, I can manage like a week off. That's going to be okay.” But he said to me, “Well for your first month off” and I was like, “What? Like–I don’t–what? I can't possibly take a month off because semester starts and all of these other things are going on.” But he said it’s just not an option. So then I went back to the doctor after a month to go, “Am I ready to go back to work?” He said, “Now for the second month” and I'm like, “Oh for Christ’s sake” [laughs]. But my second month off was about building resilience. So I had ended up having two months off which was both very confronting but very, very helpful to me and I feel massively different this side of the flood than I did that side of the flood. So the mental cost was way more than I ever imagined it was going to be. I didn't see it coming at all. And it just kind of knocked me on my arse when it did.

Ian: I didn't feel anywhere near as bad as what Kristy did at that time. When I reached a–I don't know if I had an incident like what you were warned–Kristy was warned that would happen, but I had, I had a break of some, some description where I just was super angry over–not at anybody particularly–but was, um, it took a few days to dissipate which is just very strange for me to have that kind of feeling. And that had chest pains, and the constant sore neck, and then headaches, and stuff like that. And they took a long time. The headaches in particular took a long time to dissipate once I was even out of the circumstances. Watching and learning from Kristy all of the stuff that she was learning while going through this experience, I had more of an idea of what was happening to me but still didn't stop when I should have. So I ended up taking two and a half months once we got to–once I got to that point where that was obviously necessary. It was helpful that we both didn't have a breakdown at the same time. That would have been–

Kristy: We staged that–

Ian: Far more difficult [both laugh]. Yeah we’re so smart [both laugh]. It's like, it's much better. If we'd both reached our lowest ebb at the same time, it would have been horrible.